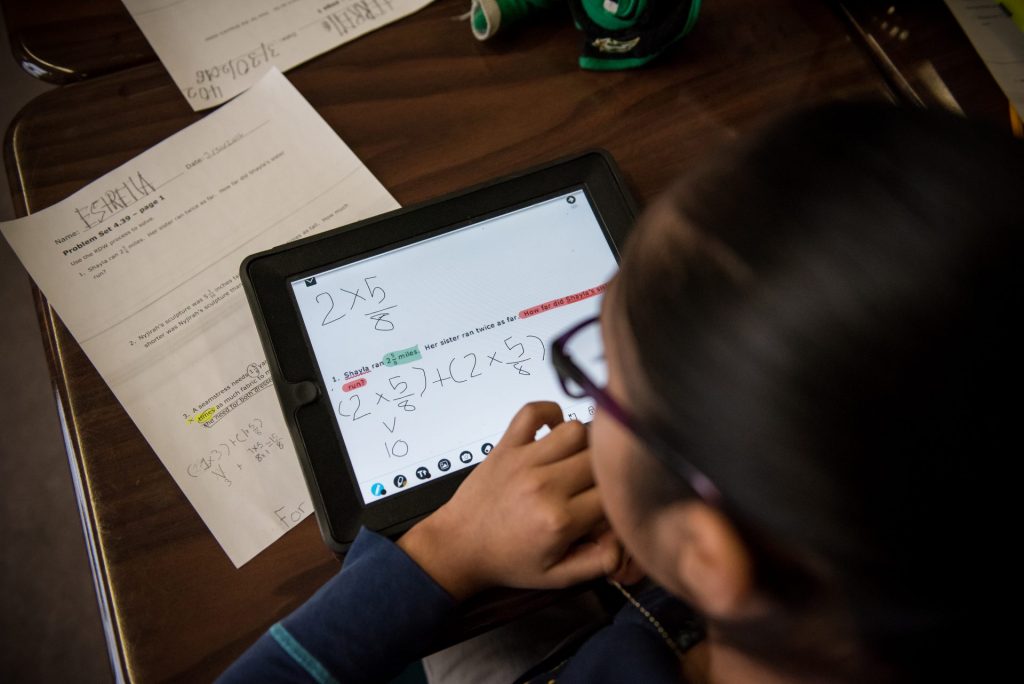 The Fund asked a group of City Schools’ educators to share their experience of teaching during this time of school closures due to the COVID-19 crisis. In our second blog post of this series, Wyatt Oroke, 7th and 8th-grade teacher at City Springs Elementary/Middle School, discusses the importance of empowering his scholars to “tell their truths” during such uncertain times:

Take a structure and system that has been functioning the same way for decades, now ball that up, throw it out the window, make an entirely brand new system overnight, and try and rid it of all the systemic inequities that plagued the first system…I give you distance learning in Baltimore City.

The task before us was a daunting one: find a way to individually train over 600 scholars at City Springs Elementary/Middle School on a virtual learning platform, that we ourselves were still getting trained on, while also ensuring those 600 scholars were engaged in rigorous academic work and had their social and emotional well-being supported. Throw in the hurdles of limited access to the internet, minimal access to electronic devices, food insecurity, and a host of other systemic inequities, and the task appeared to be impossible. But somehow, someway, hundreds of scholars began logging in. They were logging in to learn, logging in to connect with their teacher and friends, logging in to engage in mindfulness moments, logging in say hello to those they miss, logging in to feel whole again.

I asked myself as I began this work: what do I honestly need my scholars to get out of this moment? Sure, I need them to be able to explore rigorous texts and I need them to be able to write thoughtfully, but at the end of the day, what is it that will really matter to them as people? I thought back to the walls of my classroom, the walls I was so used to calling home. In the four corners of my room, I have four bulletin boards. They state: read critically, write consciously, speak clearly, tell your truth. It is these four pillars of our classroom that make the space so sacred. It is that last pillar, tell your truth, that holds everything together, so my new question was: how do my scholars tell their truths in a moment like this?

I found myself grappling with this question day after day at the beginning of distance learning. Meanwhile I had around 80% of my class logging in, reading engaging texts from Ray Bradbury’s Fahrenheit 451 to D. Watkins’ We Speak for Ourselves, and then showcasing their knowledge on rigorous assignments and challenging writing tasks. I was getting endless phone calls and text messages and FaceTime calls and Google Classroom comments from scholars asking for help, or sharing their thoughts about the reading, or just checking in.

Finally, one day, I was sitting down to look over what the scholars had completed during the day when I get a ding on my phone. It was a notification from one of my 7th graders in Google Classroom; I clicked on the notification to see what he had said, and it just read: “I’m done with my work Mr. O.”  I let out a slight chuckle because the young man knew that I was going to check his work and I would be able to see that it was complete and turned in, but he wanted to take the extra step to let me know that he had finished it. It was at that moment that I realized this was his truth. The work I had been exploring for the past several weeks, the hundreds of assignments I was reading over weekly, those were the truths of my scholars.

Their truth is that regardless of the inequities and hurdles in front of them, regardless of the systemic racism that has attempted to hold them back, regardless of the personal challenges they may be going through, regardless of the pandemic that was ravaging communities around them, they found it inside themselves to hold onto the central principle that they are scholars first and foremost. They believe in the incredible power of education. They have shown that they will leap over hurdle after hurdle if it means a brighter future for them, their family, and their community at the finish line. It is that unwavering resiliency, that relentless pursuit of the truth that keeps me inspired and keeps me grounded every day.

This moment in our education system has put on full display the glaring inequities that our students of color in Baltimore face. But it has also put on full display the resiliency that our scholars carry with them every day. It is because of that resiliency that we are all called to do better, to push harder, to take away hurdles, to breakdown inequitable structures, and to seek out an educational system where all children have the opportunity to blossom and grow. It is time to roll up our sleeves and get to work.

NOT IN SERVICE a Year-and-a-Half Later: A Progress Report on Transit Equity for City Schools Students