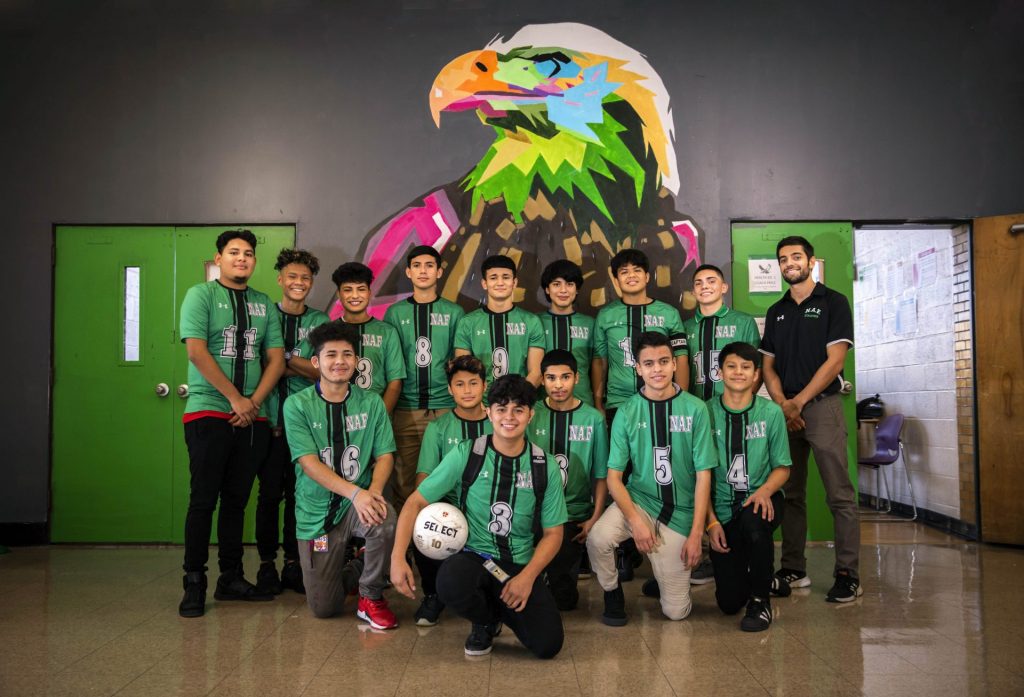 Anthony Blake, ESOL educator and soccer coach at the National Academy Foundation, shares how the facilities upgrades and support from Under Armour have impacted the growth of NAF’s inaugural soccer program:

The National Academy Foundation soccer team took the field this year as a mosaic of the new faces that are rapidly populating Baltimore City Public schools. Bypassing the traditionally dominant fall sport of football, these student-athletes found brotherhood and community through a shared love of sport.

Few equate Baltimore City Public Schools with the immigrant, English Language Learner students that make up the fastest growing demographic in the city. Yet the NAF soccer team is emblematic of this shift, as we bring together students born in six different countries, oscillate between English and Spanish, andprovide a family for student-athletes not just new to high school, but to the United States as a whole. In a year’s time NAF grew from having no soccer program to sporting both a boys and girls varsity team.

As we continue to build our program up from its infancy, we intentionally mold our brand. Thanks to Under Armour, we now have the opportunity of fresh new jerseys, a state-of-the-art weight-room, and coaches receiving the highest quality training and development. In the past, our lack of resources placed a ceiling on what we could accomplish. A year ago as fall sports drew to a close, this meant the few student- athletes who remained dedicated were confined to running through stairs and hallways. With our new weight-room at the core of the recruiting pitch, our rosters for Indoor Track have sky-rocketed to over 25 for both a Varsity boys and girls team. The myriad of resources Under Armour has provided grant our soccer community the opportunity to expand from a season-long team into a year-round family and athletic department.

The motto scribed on our gym and shirts, We Will, extends beyond the workout for the day or game for the week. First and foremost it applies to what is demanded of student-athletes to be a part of our family by following our team’s code of conduct academically and behaviorally. More importantly, it speaks to what brings our student-athletes from diverse backgrounds together; that we aren’t just fighting for the next win, but for the opportunity for a better life. Juggling learning English, rigorous class schedules, immigration challenges, and part time-jobs requires a familial support system to ground us in the belief that whatever the obstacle: We Will.